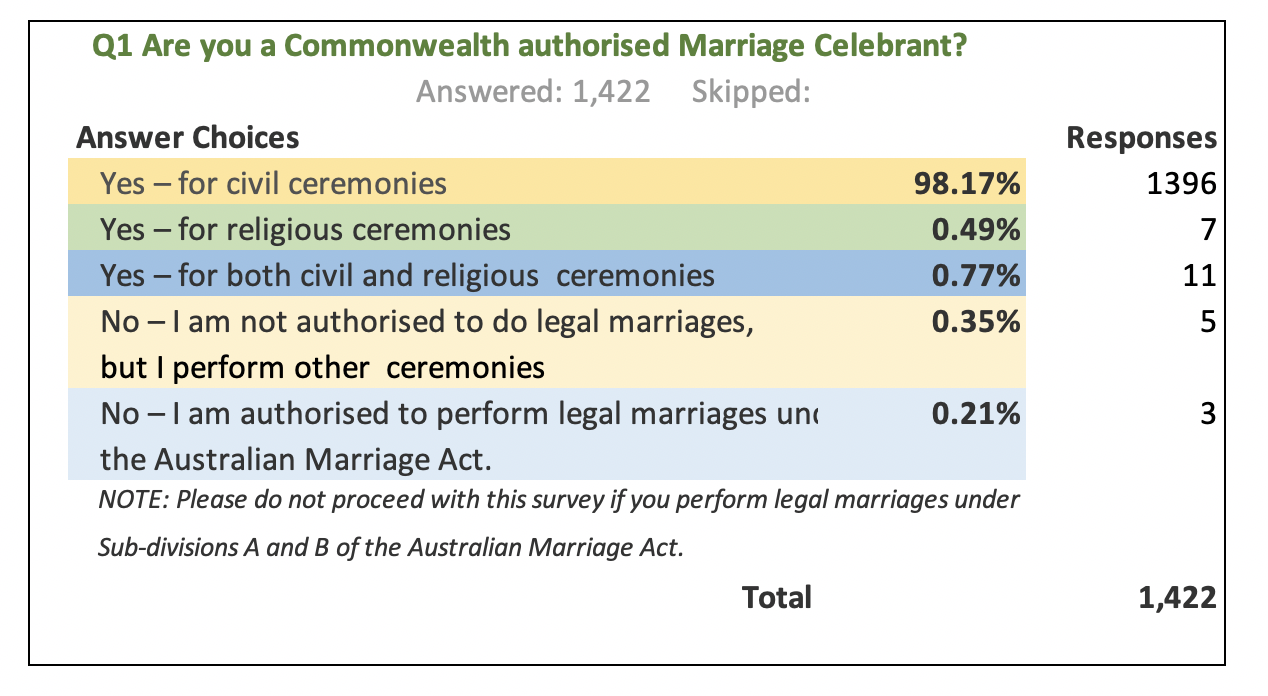 99.5% of respondents were authorised marriage celebrants.

82 % of respondents were female

18% of respondents were female.

82.62% of marriage celebrants respondents were over 50

50.7 %  of respondents perform the majority of ceremonies in Capital city and suburbs

50.5 % of respondents perform the majority of ceremonies in Regional city & suburbs or Regional towns or villages

4.3 % of respondents perform the majority of ceremonies in Rural / remote area or Off shore islands

Three quarters of all marriage celebrants (75.8%) reported doing less than 20 weddings in the previous year.

More than half of marriage celebrants (55%) reported 9 or less weddings pa - including 7% who reported doing no weddings.

One off unique ceremony, with original text, rituals, choreography
62% of respondents charged less or about the same as their registry office

Summary:
If celebrancy was a major source of their income..

8.5 % of respondents indicated Funerals &  Loss ceremonies work was 90 to 100% of celebrancy income


If celebrancy was not a major source of their income 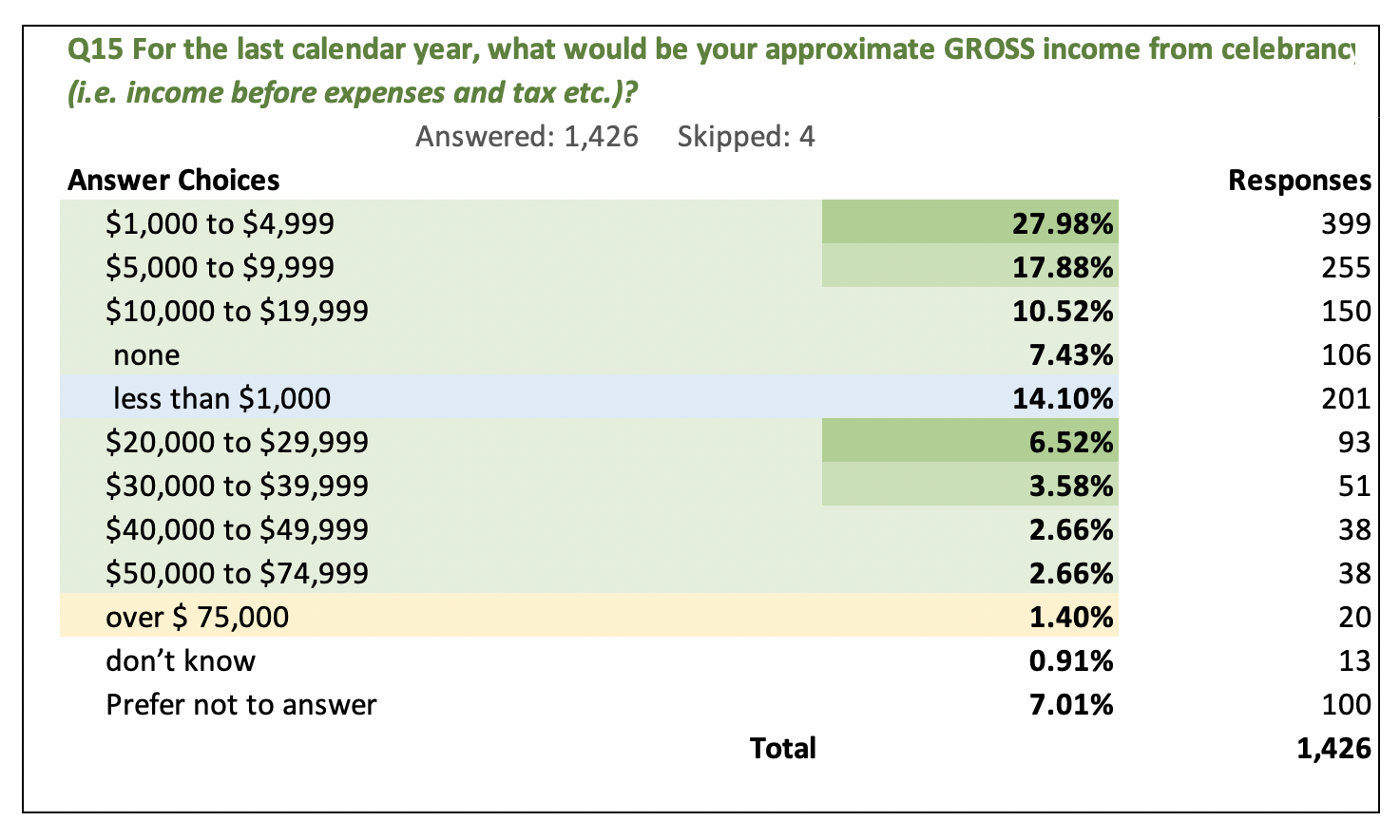 
Over ninety (92.2%) percentage of marriage ceremonies had more than 25 quests

Over sixty percentage (65.1%) of other ceremonies had more than 25 quests

96% of couples married by respondents were residents of Australia

where the latter was slightly less common than the former (54:46) 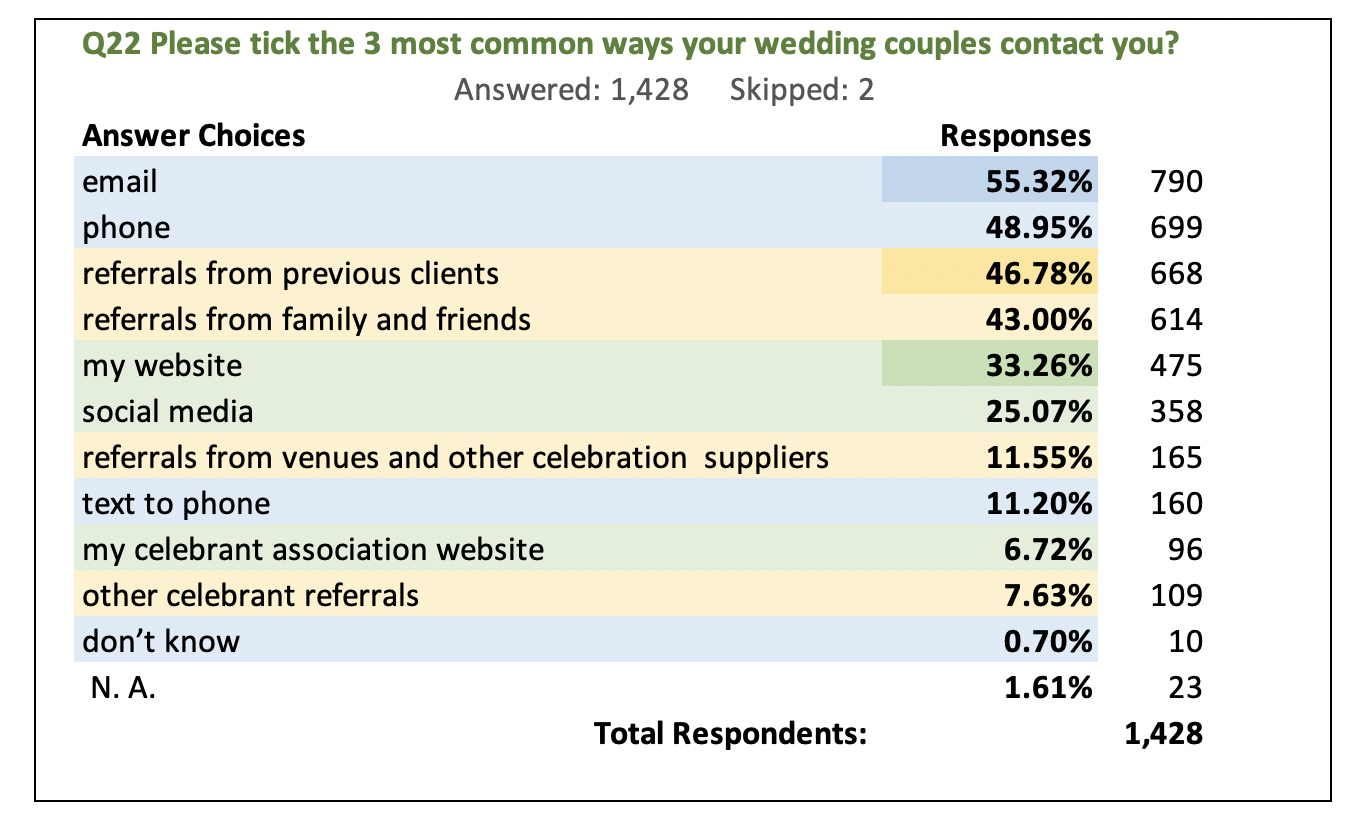 When combining the types of referrals into three major categories:


40% were from by traditional media- phone, text to phone or
38% were by word of mouth referrals
23% were  from celebrant's own website, celebrant association website or from social media.


Given that the contacts from phone, text or email are a secondary source (ie require the celebrant’s number or email being found somewhere)

this means
- 63% from word of mouth referral and
- 37% from newer technologies.

About half of all couples agree to working with the celebrant to design a personal ceremony just for them
About forty percent (38.98%) of couples accept the type of ceremony the celebrant offers

Less than 3% (2.8%) of couples have firm ideas about their ceremonies

About one quarter (26.4%) of couples ask for guidance 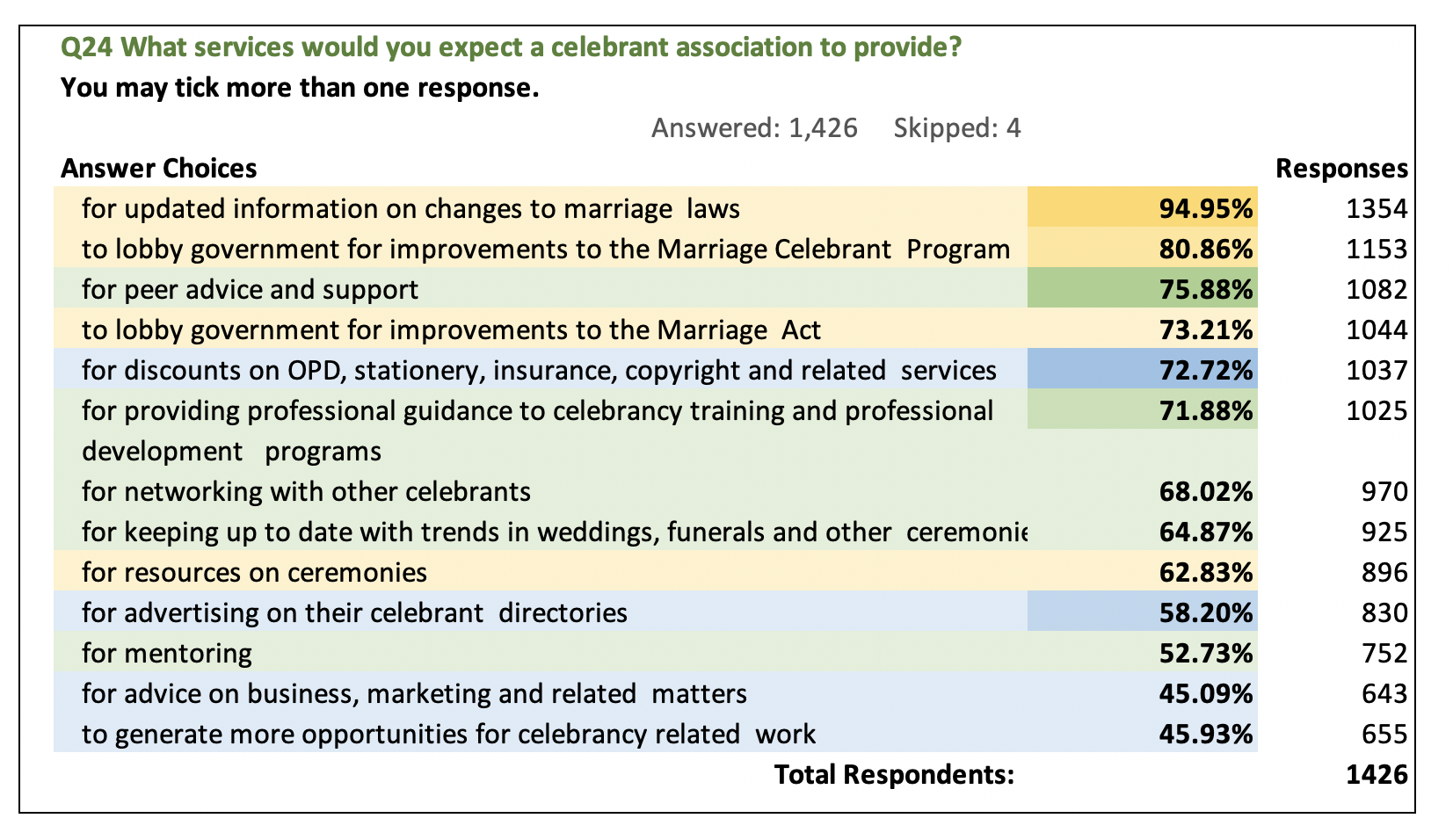 Secondly for celebrancy related information and support
• providing peer support;
• for networking with other celebrants;
• for keeping up to date with trends in weddings, funerals and other  ceremonies
• for resources on ceremonies
• for mentoring

Thirdly for professional/ business related support services:
• for discounts on OPD, stationery, insurance, copyright and related services
• for advertising on their celebrant directories
• for advice on business, marketing and related matters
• for generating more opportunities for celebrancy related work

Three quarters (74.84%) of the celebrants surveyed belonged to a professional celebrant association 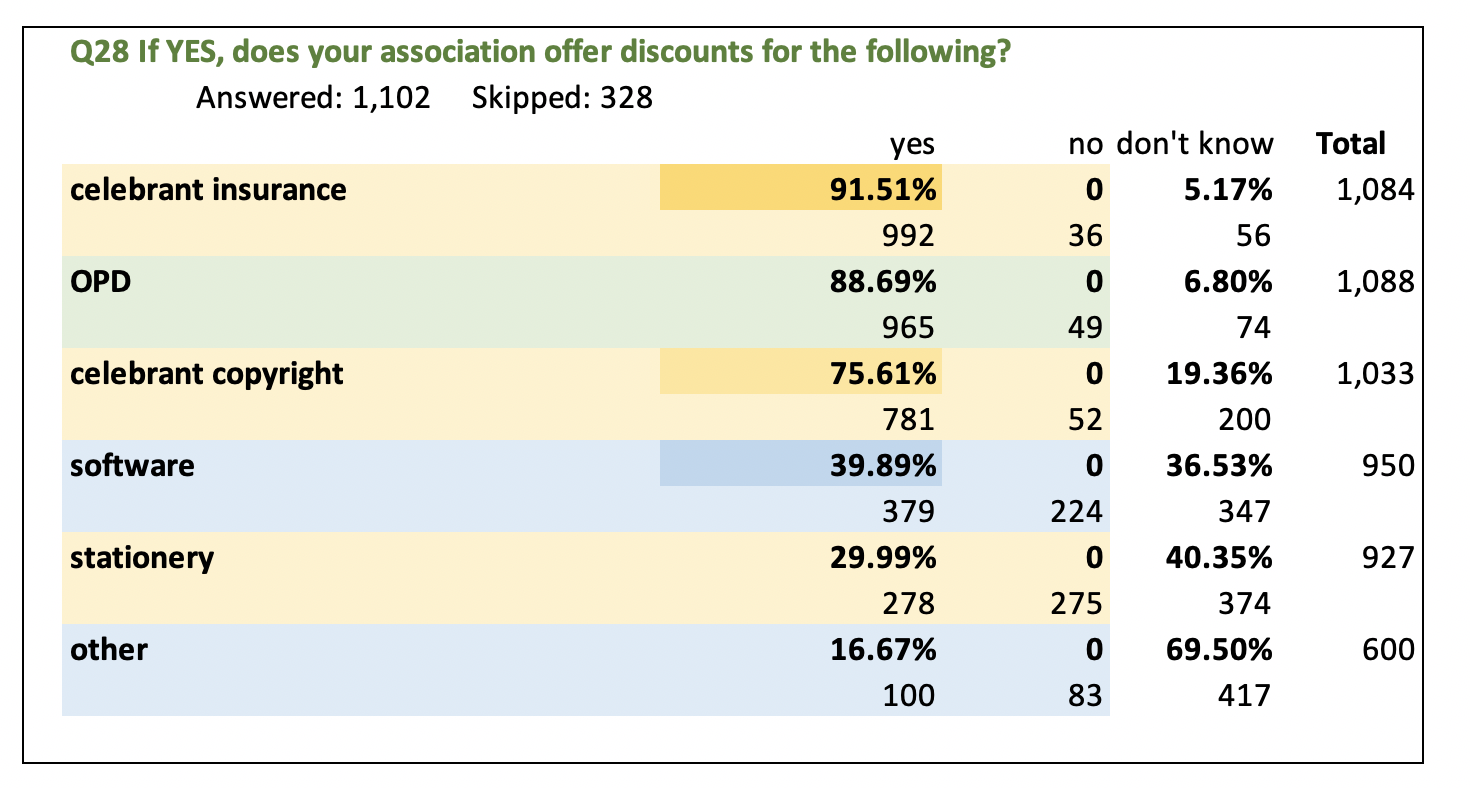 The main discounts offered by surveyed celebrants' associations were for celebrant insurance,OPD and celebrant copyright licence.

Morecelebrants had group (47%)  Celebrant Professional Indemnity and PublicLiability insurance cover than Individual (30%) cover 19% were not sure whether their cover covered them individually or a group of celebrants on their policy. 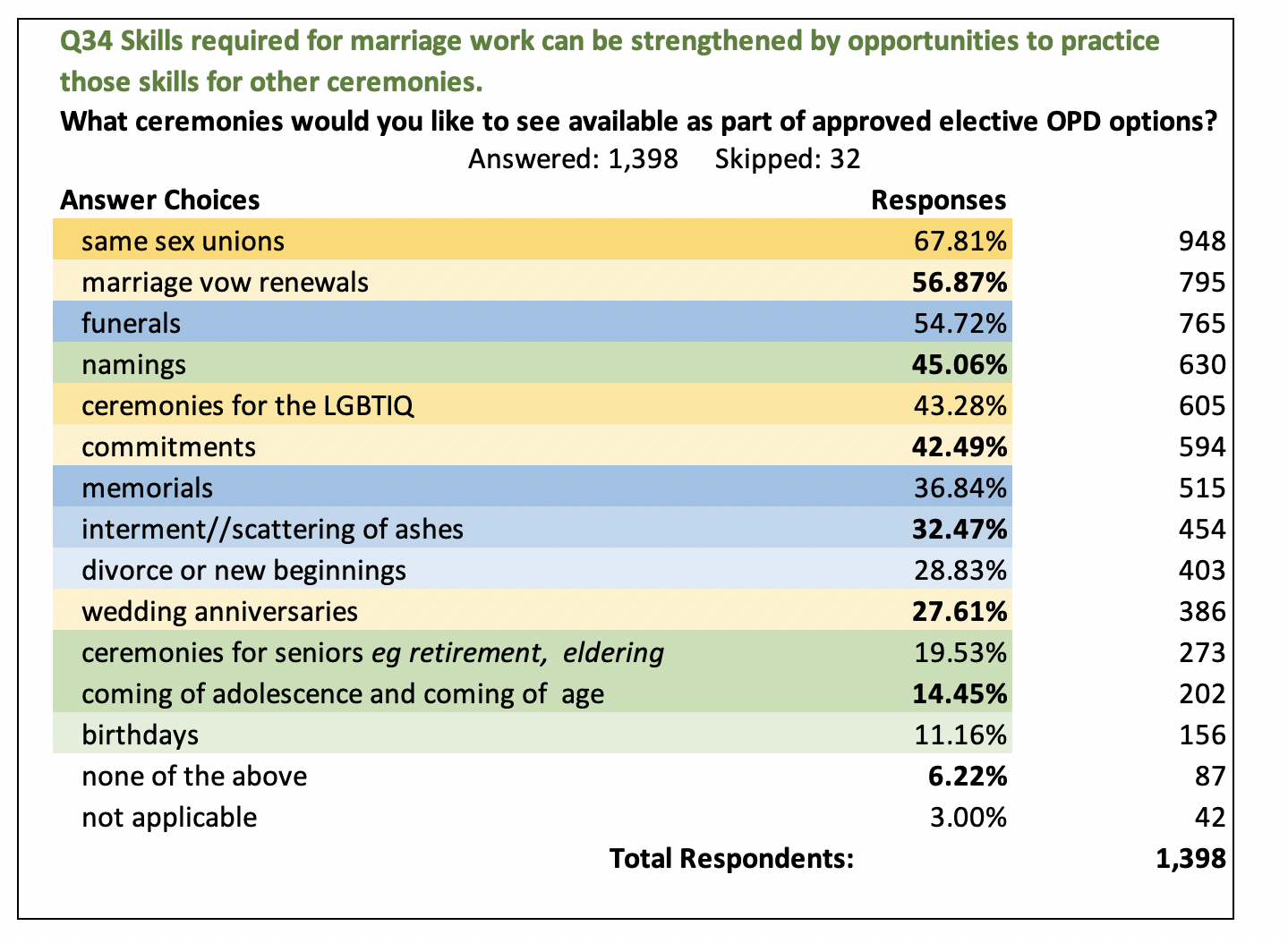 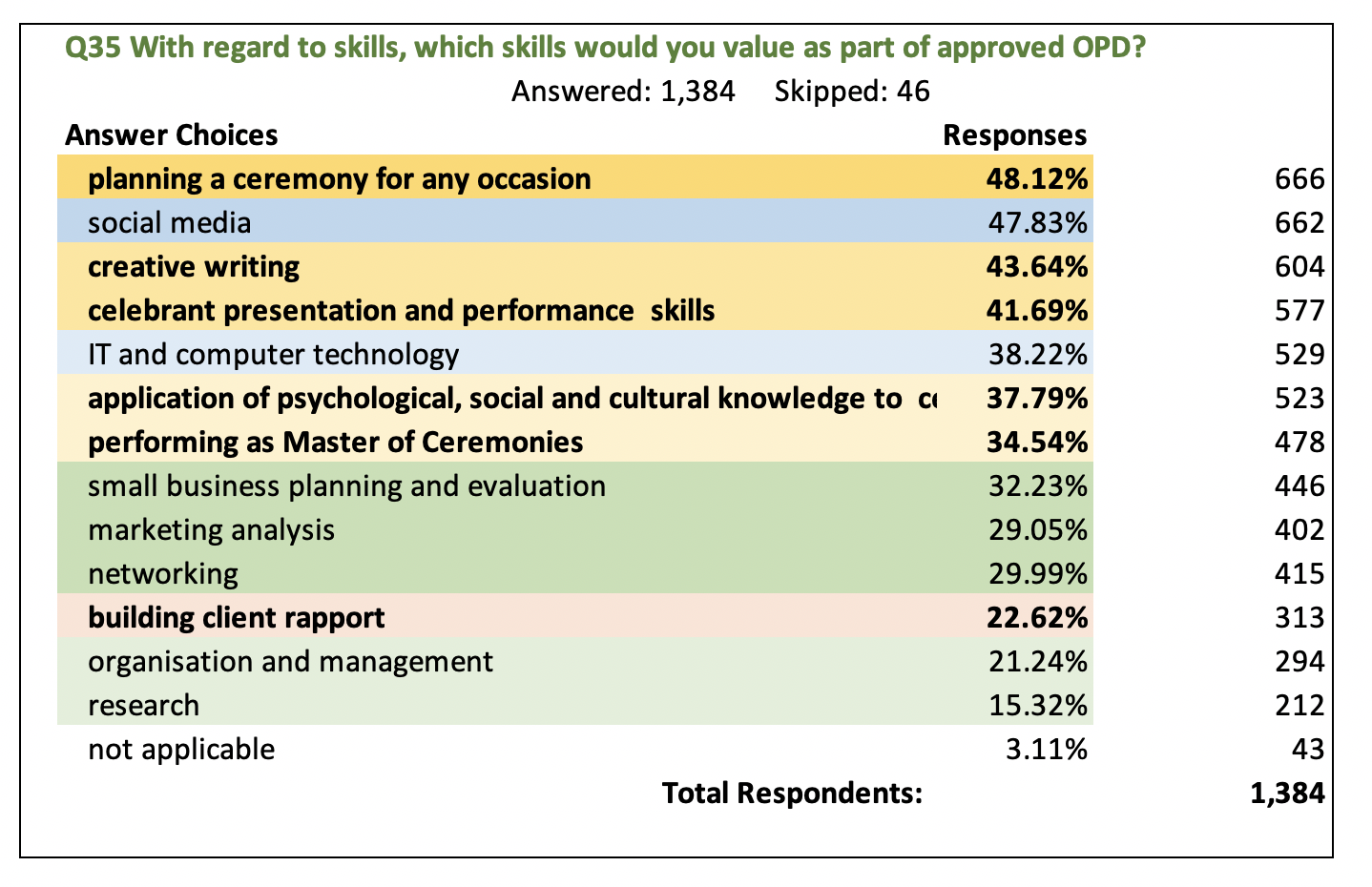 Ceremony Design and Delivery: Planning a ceremony for any occasion, creative writing, celebrant presentation and performance skills and the  application of psychological, social and cultural knowledge to ceremonies, ranked the top priority for those celebrants surveyed  (35-48%)

Social media, IT and computer technology ranked as almost as an equal top  priority for those celebrants surveyed (38-48%)

23% of surveyed celebrants did not know if professional celebrant associations could be more  involved in the approval and provision of ongoing professional development activities as is the case in other professions.

7%  of surveyed celebrants thought professional celebrant associations could not be more  involved in the approval and provision of ongoing professional development activities as is the case in other professions.